We are delighted to announce our 2020 concert season. All concerts are 3:00 p.m. at St Andrew’s on The Terrace, Wellington.

Tickets are $20 per concert, $15 for concessions, free to secondary school students and younger.

We offer a season ticket for $60, available from Eventfinda.

We are delighted to welcome our guest soloist, Ana Šinkovec Burstin, to play Grieg’s magnificent Piano Concerto. This is Grieg’s most powerful composition. Liszt championed the work in the years following its composition and is largely responsible for this being one of the most widely played and well known of the piano concertos.

Born in Ljubljana, Slovenia, Ana Šinkovec Burstin is an international prize-winning pianist. She is the holder of Masters degrees from conservatoires in Ljubljana, Brussels, Bergamo and Paris. She has won prizes in Germany, France, Slovenia and Italy, including First Prize at the Nikolai Rubinstein International Piano Competition in Paris, and the Lindau Prize in Germany.

Our conductor, Sam Burstin, combines the Grieg with works by two other Scandinavian composers. Nielsen’s Helios Overture follows the path of the sun from sunrise to sunset. Sibelius’ sublime fifth symphony is similar in character to the Nielsen, its finale bringing the concert to a wonderful conclusion.

Tickets (full price $20, concessions $15, secondary students and younger free) available on the door or in advance from Eventfinda.

Our September 2019 concert was a triumph for the Orchestra. Our guest conductor, Michael Vinten, had created a beautiful orchestration of Mahler’s Piano Quartet. The Orchestra was delighted to perform the premiere and the audience greatly appreciated the orchestration and WCO’s rendition. You can read a full review on Middle C’s website.

The Piano Quartet, alongside Beethoven’s Fidelio Overture, comprised the first half of the concert. But these two works occupied less than half of our rehearsal time this term. Our big challenge was Bruckner’s third symphony: over an hour of romantic music, with many tricky corners. A great deal of personal practice from everyone led to a well-polished final performance. Both Michael and the players are justifiably proud of how well WCO rose to the challenge. The performance was a resounding success. 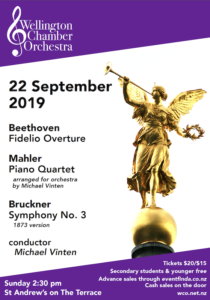 Orchestra in the third of its 2019 season concerts.

This term’s pieces are related by revision and rewriting.

Beethoven’s Overture to Fidelio is the fourth overture that Beethoven wrote for his only opera, Fidelio. The other three are known as the Leonora overtures, after the original 1804 name of the opera. The Fidelio overture was written for the 1814 revival of the opera.

Mahler’s Piano Quartet in Am is a single movement piece, thought to have been intended as the first movement of a never-finished chamber work. Michael Vinten has orchestrated the movement for full chamber orchestra.

Bruckner‘s Symphony No. 3 in Dm, WAB 103, was dedicated to Richard Wagner. It is the most heavily revised symphony that Bruckner wrote. There are three substantially different versions of the symphony. The original version was written in 1873, the second version in 1877 and the third in 1889. WCO is playing the 1874 revision of the original, 1873, version, in which Bruckner made improvements to the texture and orchestration while keeping the overall length and structure the same. This version contains many quotes from Wagner’s work, which were removed in the later versions.

Tickets available in advance from Eventfinda or on the door.

Sunday 30 June, Ken Young, from the New Zealand School of Music, conducted the orchestra in a brilliant performance of four romantic works. The Tasman Trio played Beethoven’s Triple Concerto brilliantly. The reviewer from Middle C found Delius’s The Walk to the Paradise Garden the highlight of the concert.

We are delighted to have Ken Young as our conductor this term. Ken has selected a programme of music by Romantic composers, including Beethoven’s Triple Concerto, which will be performed by the Tasman Trio.

In addition to his work as a performer and a conductor, Ken is one of New Zealand’s leading composers. His works have been performed nationwide and also in the United States, Europe and Australia. Since 1988 he has been a member of the faculty at Te Kōkī New Zealand School of Music, Victoria University of Wellington, where he lectures in conducting and orchestration. In 2004 he was awarded the Lilburn Trust Citation in Recognition of Outstanding Services to New Zealand Music.

Tickets available in advance from eventfinda or on the door.

This term we feature, as soloists, two of the exceptional musicians of the New Zealand String Quartet. Formed in 1987, the Quartet has established an international reputation for its insightful interpretations, compelling communication, and dynamic performing style. The Quartet performs over eighty concerts to popular and critical acclaim each year.

Monique Lapins (violin) studied at the Australian National Academy of Music and at the Yong Siew Toh Conservatory of Music in Singapore. She has twice been a finalist in the Asia Pacific Chamber Music Competition and has participated in chamber music programmes and festivals in Europe, Asia and Australia.

Gillian Ansell (viola) studied at the Royal College of Music in London and at the Musikhochschule in Cologne. She worked as a professional player in London before becoming a founder member of the New Zealand String Quartet in 1987. She was second violinist for two years before taking up the position of violist with the group. In 2001 she became Artistic Director, with NZSQ first violinist Helene Pohl, of the Adam Chamber Music Festival. Her services to music in New Zealand have been recognised with the MNZM honour.

Rachel Hyde returns as guest conductor with a carefully chosen programme that includes Brahms first symphony and Mendelssohn’s Ruy Blas Overture alongside Mozart’s sublime Sinfonia Concertante. Rachel first picked up a baton at age 15, went on to be Musical Director of two orchestras in the UK, and guest conductor for two more. She moved to New Zealand in 2003 to become Artistic Planning Manager for the NZSO. Today she works in government and is a regular guest conductor for both WCO and the Kapiti Chamber Orchestra.

Ian Ridgewell conducts the Wellington Chamber Orchestra in a programme of work spanning from the late 19th to the mid 20th century. Our soloist is Matthew Stein, freshly returned to New Zealand from doing his Master of Music at the Guildhall in London. Matthew is a Wellingtonian and a graduate of Te Kōki New Zealand School of Music. He was NZSM Brass Player of the Year in 2010 and won the Brassiers and Armourers Brass Prize at the Guildhall in 2017. We are delighted to have him playing with us this December.

Andrew Atkins, assistant conductor for Orchestra Wellington, conducts the Wellington Chamber Orchestra in four great romantic symphonic poems. We are delighted to welcome Thomas Nikora as our soloist for Rachmaninoff’s Rhapsody on a Theme of Paganini.